I have something very special for you today, something that’s very near and dear to my heart.

This goes right along with what we’ve been really focusing on lately, which is veterans. You may know that I’m a veteran myself and spent four years in the Navy.

Absolutely enjoyed it; loved it. My dad was in the Navy, stationed in San Diego, just like I was. I had a grandfather that was in World War II, and I have an interview with him to share with you today.

Aid and Attendance: What Benefits Are Available For Veterans and Their Spouses?

What we’ve been doing lately is working on Aid and Attendance for veterans and other veteran’s benefits. We can process Aid and Attendance applications in-house and submit them through the local VA representative, who we’ll work very closely with.

VA Aid and Attendance is a program where you can get a monthly monetary benefit for a veteran, the spouse of a veteran or spouse of a deceased veteran who has to have day-to-day care. In order to qualify one must meet certain qualifications.  A doctor can be involved in the qualification decision.  However, if the veteran is in an assisted living facility or nursing home they automatically meet the initial qualifications as long as the other criteria are met as well.

Below is a table of the current maximum monthly benefit amount:
Benefit Table*:

* benefits accurate as of the date of drafting unless otherwise indicated and updated.

Aid and Attendance is a little known benefit that I’ve been blogging and talking about lots lately.

There is an asset level threshold and the rule of thumb is below $80,000, but we believe it’s really around $20,000. There are ways under the rules to position assets and still qualify for Aid and Attendance assistance.

You can make smart decisions to hold on to your hard earned money and property while still enjoying the benefits of the extra income.

If you’re a veteran, you have served ninety (90) days of active duty, one (1) day beginning or ending during a period of War, you may be eligible for the Aid and Attendance benefit.  Here is a link to all war time events that the Veteran’s Administration has designated for A&A benefits: http://www.veteranaid.org/docs/Periods_of_War.pdf

I would qualify because I was in the military during the window for the Gulf War. That would qualify for me for Aid and Attendance if I should ever be in a situation to need the benefit. It would qualify my spouse as well. Even if I passed away, she’d still be eligible for that benefit through me.

On that note, let’s get to the interview I did with Papa J, who was a veteran of World World II.

He passed away when I was 13 years old, but I was extremely close to him. JC Horne was his name. Stood for Johnathan Chives, but the doctor only wrote JC on his birth certificate.

Papa J was what I called him; everybody knew him as Jay or JC.

I’ve always found if I really start concentrating on something and looking at a specific area of law, business, or anything else, everything else around me pops out.

So I started searching for this old tape that I had of this interview. It was on an old cassette. Then we found the tape and I converted it to digital, so we have it for posterity.

I’ve e-mailed it around to my family members and given it to them so they can keep it in a lot of different formats – put it on a CD, e-mail it, or listen to it on their phones.

And I want to share it with you today. So without further ado, here’s the transcription of my interview with JC Horne, World War II veteran. 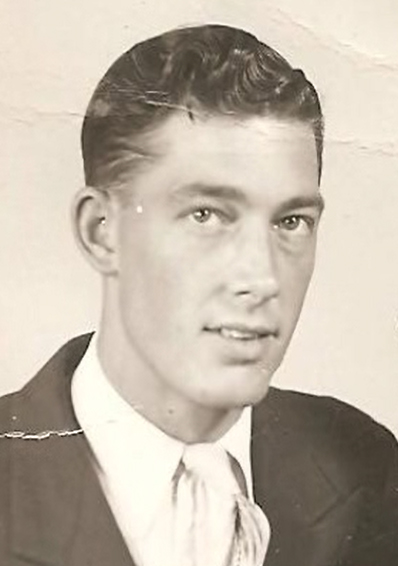 JC: It was December the 7th, 1941 on a Sunday morning. I was sitting, listening to the radio. They broke in saying Pearl Harbor had been bombed by the Japanese. I, like most people, didn’t even know where Pearl Harbor was.

Went to Ft. Bragg, was inducted, sent to Camp Blanding, Florida. Took 16 weeks of basic training. Went to Camp McCoy, Wisconsin, and on Thanksgiving Day of 1944, I boarded the ship for Europe.

We didn’t know where we was going. They didn’t tell us until we got halfway across. So we landed in Portsmouth, Engald, a southern resort equivalent to our Miami, Florida. We stayed there ’til Christmas. And left for Le Havre, France. And went from there to the Battle of the Bulge.

So we relieved another division, then went to Luxemborg. From then on, we went into the Siegfried Line. At about March, they started letting guys, one at a time in the company, get a pass right off the front lines. You had a choice of Brussels, Paris, or London.

So I took four days in Paris, and had to go right back on the front lines again. At that time, the war was winding down. Still war was going on by that time, but it wasn’t that severe.

And we started taking a lot of prisoners everywhere we went. We knew it wouldn’t be long until the war would be over then. And the war was over a little later, in April. In the meantime, they put us on displaced persons camps. Guarding them. Looking after them.

We did that, for about a month. Then to my disbelief, they said we were going home.

I was very, very happy. And I got home and I was about the happiest person in the world, I guess. I knew a little later, I’d be getting a discharge.

JC: I was a machine gunner, .30 caliber. The same type they used in World War I. It didn’t fire as fast as the German machine gun, but it was very accurate. You could pinpoint a target by going up a click, down a click, left a click, right a click. You could just about drop something in their pocket.

One person would carry the tripod. One ammo. You strapped it onto your back, with a board with straps on it. And two cases of ammo was on that. And the other one carried the machine gun.

And when you had to mount the gun, one set one down and we mounted that and it’d be ready to fire in a matter of seconds. So that’s what I done.

In the meantime, machine guns would always catch a lot of mortar fire and artillery fire. So my helmet looked like it’d been hit with a hammer all over it. We dug down and shrapnel hit your helmet, you know. Where if you hadn’t been ducked down, might have wiped you out.

See, the blast goes up like that. Then you hit the ground. If it don’t hit right on you, you’re alright. You had the 88s coming in, you could hear that. A screaming sound. And you got to where you could tell exactly where they was going. If it got to a certain level, start to fading away, it’s okay. If it got louder and louder and started screaming, you know it was coming close.

You hit the ground. Until it hit the ground, you stayed there. Sometimes it knocked tops of trees out and everything, all around you.

Greg: “Could you tell us about your foxholes and where you stayed during that time?”

Well, we had to dig the gun in every time. And especially at night, we’d have one on the gun. The squad had one on the gun all the time. And the rest of us slept. After you spent two hours on the gun, you’d go wake the next man. He’d spend two hours, he’d wake him up, by the time that comes around, it’s your turn again.

Every night, when you would be on the gun watching for something, seemed like about every tree in the distance would move. You’d think it might be somebody. You’d be watching that tree, and it seemed like it moved.

Near the end of the war, when we knew it was about over, it wasn’t over, but we had met hundreds of German troops, with their commanding officer in front, walking right toward us. To give up. We’d just motion them back to the rear. We didn’t have time to fool with them.

Most of the time, the commander would be a general or something. They didn’t want to be captured by the Russians.

Greg: “What would the Russians have done to them, probably?”

They treated them very, very mean. For the simple reason, the Germans treated them that way. So they were very afraid of the Russians. They knew they’d take their anger out on them.

Wow, just reading through that interview gives me chills.  I loved that man with all my heart and he was my buddy.  It is hard for me to believe that the gentle man I knew and loved as my grandfather experienced such atrocities.  I imagine what a vacation four (4) days in Paris must have been like when you had been fighting on the front lines during the War in Europe.

Many who have been in war time situations whether on the front lines or not may be eligible for the little known benefit of Aid and Attendance so it is best to investigate your eligibility with the Veterans Administration and an Elder Law Attorney.

Posted on July 3, 2015 in Veterans Aid & Attendance by Greg McIntyre