One of the more recent options for care has emerged in the form of Adult Day Care centers, which are not only relegated to senior citizens, but individuals who have special needs, as well. I consider myself lucky to be a friend of Suzi Kennedy from the Life Enrichment Center of Shelby, North Carolina. When it comes to taking care of special needs individuals and seniors, Suzi and the people that she works with through the Life Enrichment Center have been upheld as national examples of how to create a system of adult day care that really and truly works. Not long before publication of this book, I had the pleasure of sitting with Suzi to chat about the Center’s history as well as the impact of adult day care in this country. Due to the magnitude of her work, I would be especially honored to dedicate part of this chapter to highlighting what she and the Center have done over the past few decades.

Every success story has an interesting background that cannot be ignored. Suzi, originally from New York, moved down South and began teaching nurse aid classes at a community college. When she took her students to the nursing homes to complete the clinical part of her course, she realized something: most of the elderly patients that they encountered were only in these nursing home facilities because they had no other alternative. There was no one to care for them around the clock at home, and in order to ensure they got the attention they needed, their families had entered them into these facilities. This was in the 1970s, meaning back then there were no assisted living homes, according to Suzi. Nursing homes, at least during that time, seemed the only viable option for elder care.

Suzi got to thinking and tried to come up with some alternatives, but at each turn, she was told that her ideas fell under the category of home healthcare, a practice that was already in full swing. She knew that something besides home healthcare could be done, but she didn’t know what. Then one night, after watching a television program on nursing homes, she saw an adult day care center in California mentioned in the credits. It was then that it hit her: adult day care was the way to go. This lit a fire in Suzi; she called the center, collected some information, and later joined a North Carolina state association of adult day care providers. Not long after, Suzi spoke with the minister of John Knox Presbyterian Church here in Shelby, and they opened their doors for the first time as Life Enrichment Center.

1980 was the year that Life Enrichment Center received their first participants: one man and one woman, and they would come to the center twice a week. A year to the day, however, the Center was logging an average daily attendance of 12 people, which – according to Suzi – in the history of adult day care, that’s unheard of. With that level of participation, they opened their doors five days a week and continued to flourish as a not-for-profit organization. In order to have more of an impact on the community, Suzi and board decided that they would accept different types of funding so that they could serve people who had a variety of funding streams, such as Medicaid. To this day, Suzi swears that was one of the best decisions they ever made, thanks to the enormous positive effect it had on their ability to reach more people in need; not just the elderly, but younger individuals with special needs. 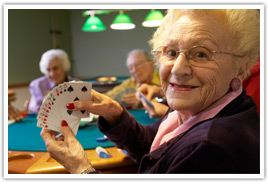 Not long after, the Life Enrichment Center was honored with a $500,000 grant from the Robert Wood Johnson Foundation, and was one of only 16 centers in the United States to receive that recognition. One of the main reasons they were chosen was due to the incredible work that Suzi was doing with Alzheimer’s patients. She and a few other people forged the path in the realm of what is known as “behavior acceptance”, which is a practice in interacting with Alzheimer’s and dementia patients that validates their emotional needs. For instance, Suzi had interacted with elderly patients who were distraught over the loss of their parents. Though their parents had passed away a number of years ago, these patients – due to their illness – were convinced that their parents had just died. Instead of correcting them, which would cause an even greater emotional turmoil, Suzi would sympathize with them and say, “I’m so sorry to hear that. Tell me about your parents.” This would greatly comfort the patients, and in a short while, their emotional breakdowns would cease to continue. It was due to this groundbreaking practice that the Robert Wood Johnson Foundation recognized them, and with that newly acquired grant money, they were able to expand even further.

At the time of publication, the Life Enrichment Center posted the following hours of operation: 5:30 AM to 6:00 PM. This means that families who care for their elderly loved ones can bring them to the center, leave them there if they have to go to work and carry out their responsibilities during the day, and pick them up after work. Individuals who are cared for at the center receive two meals a day, breakfast and lunch, as well as an afternoon snack.

The center also features total healthcare nurses who are available during the hours of operation and can carry out any medical procedure that’s approved by the nurses that practice. Individuals at the center can take part in speech, occupation, or physical therapy. The center boasts five levels of care, and at the time of publication, the top charge per diem is $68.

So to recap on the benefits of this center: families who are caring for a senior citizen or a special needs individual can drop them off at the center in the morning, where they will be taken care of in terms of medical attention, therapy, food, and other activities, and they can be picked up in the evening to go home and eat dinner with their families. This is a tremendously positive option for households that want an alternative to nursing homes and assisted living facilities.

There are currently two Life Enrichment Center locations: one in Shelby, the other in Kings Mountain. If you would like to contact the Shelby Center, feel free to call them at (704) 484-0405. To contact the Kings Mountain Center, give them a call at (704) 739-4858.

If you would like to sit down and discuss your current plan and situation with me, I would be glad to help you out. Give us a call at the office so that we can schedule a time to chat:

Posted on September 17, 2015 in Articles by Greg McIntyre