Hospice – A History and Guide 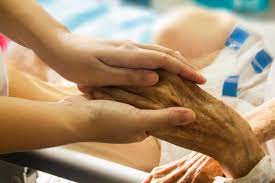 I had the honor of sitting down and talking with Patti McMurry, who has been with Hospice Cleveland

County for 25 years. We’re going to talk about what it is, any misconceptions, what Hospice does, and the other amazing services to the community.

Tell us a little bit about Hospice Cleveland County.

One thing about our community that we’ve found is that everywhere we go, no matter if they are conferences, seminars, or anywhere, Cleveland County is very unique because our agencies tend not to compete with each other, but to help each other out. It’s a great place to live and raise a family, and then grow old. We took in our first patient 30 years ago, so we’re celebrating that. The Shelby Star will have a 12-page insert all about Hospice Cleveland County: how we were formed and where we are today. As of today, we have taken care of over 10,000 people who have died in Cleveland County. We were one of the first Hospices in North Carolina.

How did you get involved with Hospice?

The way I came to Hospice was that my two grandmothers died in the same year. One grandmother died at the hospital with lots of tubes, every two hours two family members could go in to see her. When it looked like she wasn’t going to live much longer, the nurse came out and said, “Two family members can go and be with her while she dies.” My mother had 7 children in the family, she happened to be the second oldest so she got to be with her mom and everyone else was in the waiting room. Shortly after that, my other grandmother got sick with colon cancer. That happened to be the year that Hospice Cleveland County started and she was one of their first patients. Everybody was at the house; she died in her own bed, all of us were there, all the grandchildren were there and it was two totally different kinds of experiences. That’s how Hospice Cleveland County got started because there were people in our area who had heard about Hospices.

How did Hospice start?

“Hospice” the word actually comes from the Middle Ages. A hospice was originally a resting place for weary travelers. They didn’t have hotels, so if people would allow weary travelers to rest in their home, then they would put a lighted candle in their window and that signaled that travelers could stay. When we built our hospice house and our office where we are now, they were going to let us change the name of the road and we thought really hard about what we wanted to name that road. The name is Windover Heights Drive, and wind needs to go from this place to the next, which is what Hospice does: it helps travelers go from this life to the next life with quality.

It’s a pretty new concept; the first Hospice in America was in 1974, so it’s very new. Now just about every county in every state in the country has a Hospice. And every country, really, has Hospices. It was similar to the birth experience. Women used to be put to sleep when they had babies: they’d wake up and they’d have a baby. Then, natural childbirth started and things got back to nature, so the concept of death also got that way.

95% of the people who are asked, “How would you like to die?” response “At home”. Much less than half of the people die at home, and everybody wants to yet there are so many things that prohibit that. There’s so much fear in that and in modern medicine. We’ve had people call to set up an admission time, but they’re afraid. They’re thinking, “If Hospice comes in, Mom’s going to die.” But think about this: Mom is going to die, we all are. But we want to get in there and make that experience as good as possible. The scary part about Hospice is really only the first 30 minutes of that first visit, and I promise – I tell people this – if we come in for 5 minutes to explain to you what we can do, we will leave in 5 minutes if you want us to. But it’s never happened that we’ve had to leave. People are complimentary and relieved, actually. On the first visit, we give them our 24-hour telephone number that they can call for a nurse to come and visit. Even just having that number, whether they call or not, is so much security to them. You don’t have to take somebody to the hospital, you don’t have to wonder about anything. We are so involved in patient symptom control, as well.

I explained once to a doctor: when people come to the doctor and they’re in pain, they get a prescription for pain medication. But when that person leaves with that prescription, it doesn’t mean they have the money to buy that prescription, it doesn’t mean that they’re aware the pain medication is going to cause constipation. There are other things that go along with this illness in just that one pain prescription that our nurses can really address and have people as comfortable as possible, teach families how to take care of their loved ones. They have that number to call 24/7, grief counselors, chaplains, social workers, and more. Our Director of Nursing has said many times, “The easy part of Hospice work is what the nurse goes out and does: get the symptoms, the pain, and those things managed. But then the hard part of the dying process starts.” It’s those fears and thoughts and dark nights as well as emotional, spiritual, and mental things that people are dealing with.

One thing that modern medicine has taken away is a human element, because the medical model is about the medications and treatments, etc. 1991 was when the living will and healthcare power of attorney conversation started, and that was because of Cruzan and those different cases where you could keep somebody alive for years, for decades actually. And then the conversation came up, “Do you want to leave that in the medical community’s hands as to preserving life at any cost? Or do people want to include that human element in their end of life situation?”

A large part of the process is not only the death of the patient, but the grief the family members have to endure. How do you include everyone?

A lot of our focus is the family, Hospice is special in that the patient and the family are the unit of care. So the focus is just as much on the individuals of the family as it is on the patient. Oftentimes we’ll go in and the patients are doing fine; they know what’s coming, they’ve accepted it, maybe they’ve struggled and had a lot of treatments, maybe they’ve suffered a lot and they’re really fine. But for the family members, it’s hard to let somebody go. We’ve had children, we’ve had young people, and we have very elderly people. So our counselors, chaplains, and social workers really help those families come to terms with those things. Sometimes when we come in, patients are relieved that they can finally say, “I don’t want to go to dialysis anymore, I don’t want to have another treatment, and I don’t want to go back to the hospital.” They can say that because they have that support, they know that those team members are going to be there to help the family.

Can anyone get involved with your services?

Working at Hospice, we know that those documents are important. We’ve seen bank accounts being closed because until a will is probated and those kinds of things, you have to have those things in place. And where’s the life insurance policy? Where’s the burial policy? People don’t start looking for those until they need them. We want to get people to think about things on the front side, meaning before the crisis happens when you have to think about them. People also don’t realize things that happen after the death: you have to change where the money is going to, everything on the bank accounts and who the beneficiaries are. There’s a lot of work to be done, and if you do that on the front side, it’s not scary.

How is Hospice funded? How does one pay for Hospice care?

This is something I think the public does not realize: when you are a Hospice patient, Medicare has a benefit called a Hospice benefit for in home care. That benefit pays for everything that Hospice does. It pays for the staff, it pays for the equipment that has to be rented, it pays for oxygen, it pays for any supplies. It’s the benefit that kicks in before the supplement, which also covers 100% of all the medications that the patient is taking. So sometimes we can get in there and save patients and families thousands of dollars a month, because anything pertaining to that illness – heart disease, which is our primary diagnosis, or anything else you may have that you need medication for – is paid for 100%, even if it’s over the counter. A lot of people don’t know that. The only criteria to be a Hospice patient is the doctor feels like if the illness follows its normal course, that the patient will live 6 months or less. Now, we’ve had patients for a lot longer than that, but our median length of stay is 11 days. That means 50% of our patients die within 11 days after we admit them. So they’re not able to access that Medicare benefit and get all those things paid for. That is the one thing about Hospice care that keeps me awake at night, is knowing that there’s so many people who could benefit from having that support of the staff that they can call, but also financially. Being sick is very expensive.

While at the facility, some of our beds are residential that have a daily room and board fee. It’s about $140 a day. But everything else is paid for. If you’re in the GIP, which is like an in-patient or crisis – similar to a hospital – it’s paid 100%. So that Medicare benefit is so incredibly important. We work with a Hospice pharmacy, so all the medications are ordered by the nurse and they’re delivered right to the patient’s door. We’ve got a lot of elderly people in Cleveland County who are our patients; they can’t get in the car to get a prescription or go to the drug store and wait on their medications. So we try to make everything as comfortable and in the highest quality possible. The nurse orders the medicine, Hospice Medicare pays for it, it’s delivered right to the door so that people can spend their time doing the things that they enjoy.

One last comment: anybody can make a referral to Hospice. If you know anybody that is suffering or seems to not be getting better, anybody can call our office anonymously, give us a name, and we’ll talk to the doctor to see if their eligible, and if they’re not we just file that away. If they are, it can be the greatest gift that you can give to somebody.

We’re very proud of the work we do and the relationships we’ve forged with the patients. We’ve named the rooms in honor of the people who we’ve cared for, so it’s a compliment to our staff and the patients that have worked together.

Posted on October 28, 2015 in Articles by Greg McIntyre