Lunch with a Veteran – The real G.I Jane – Martha Bridges 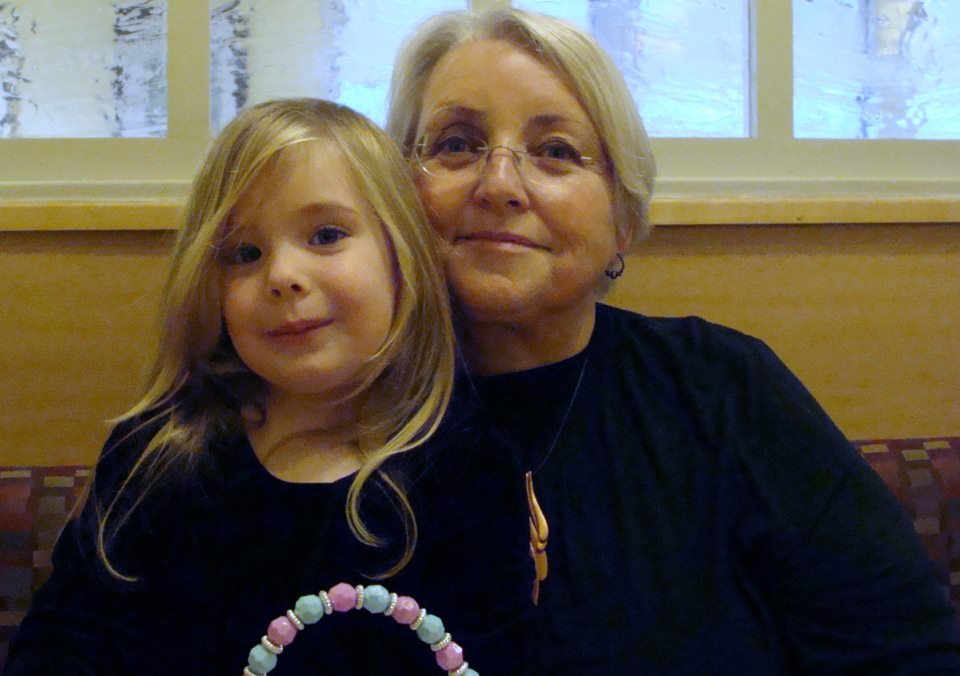 GM: I’m Greg McIntyre and I’m talking with Martha Bridges today on ‘Lunch with a Veteran.’

I really appreciate you being here today. I would like to talk about your years of service to our nation. Are you from Shelby originally?

MB: No, I’m from Concord, I grew up and was raised in Concord until I went to school in Appalachia in 1970. I graduated high school in 70, and in 73 I heard about the college junior program. I was not going to go to summer school, I was not going to get a job so I decided to see if I could do it, and I could. They took us in July of 73 to Fort McClellan, Alabama and it was for four weeks basic training.

GM: You were a very progressive lady, especially in 1973. How many women were in the military at that point?

MB: I don’t know but there weren’t a lot. After the four weeks, if you wanted to, you could go back and finish your senior year, then you would go back in the army as a Second Lieutenant.

I wanted to be a teacher and had invested that much in my education so I decided not to do it. At that point in time it wasn’t for me but it was an interesting experience.

GM: So you went to college to be a teacher?

MB: I went back for my senior year and I think it was 1974, because I went on to get my Masters, but in the summer I had the National Guard come and they said, we want you to join. They were looking for women for the military, but they said I would need to go through basic training. I thought, no, I don’t want to do that again. Then the Army Reserve came and they said, your four weeks will count as your basic training, because at that time when they were trying to get women into the military, they had a program called CASP, Civilian Acquired Skills Program, and they went for two weeks basic training. Well, I’d done four, and it counted. Years later when I started to pull my paperwork together, it was daunting the amount of paperwork the Sergeant Major had to do to get my four weeks approved for my basic training. But it was approved and I went in to the Army Reserve as a Spc 4 because when you went through the College Junior Program you were a Spc 4. I was in the 1st of the 485th of the 108th Division.

GM: We’ve always had women involved in wars and military effort but not as much with regular military service. Now it’s very common, but it wasn’t common back then. Did you get any push back as a woman going into the military?

MB: Only from my father. My father didn’t really like it. He was in the Navy and was in world war two. Women didn’t have the reputation, the honorable reputation that he envisioned, and so he took it as a negative. But as far as anything else, he did not dissuade me, nor did any others. When I went in to my unit, there weren’t but a half dozen women in there. It was drill sergeant unit, and the only position women had were clerk typist, so I started out as a clerk typist. 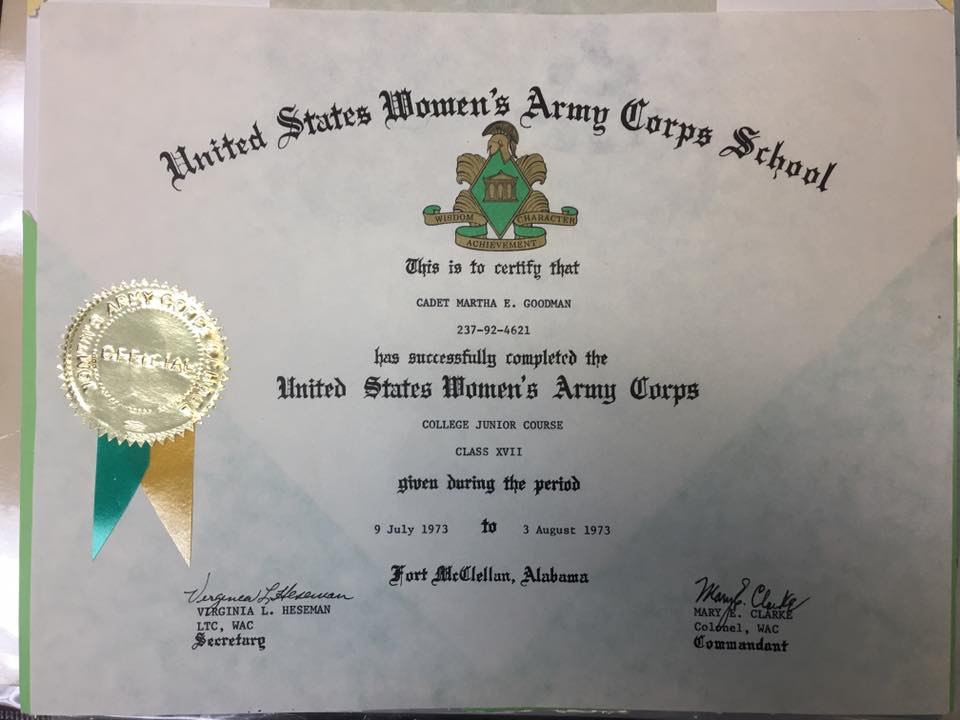 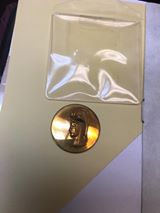 GM: Now you could serve in combat on the front lines.

MB: Absolutely, and being a Drill Sergeant Unit, people said, why don’t you get your Drill sergeant certification? I didn’t want to do that. By the time women were doing that, I had a family and I didn’t want to take away from it. It was enough to take away one weekend a month and two weeks a year annual training.

MB: I retired one day short of twenty-two years because I did not want to go to AT. I was tired. Now I have retirement, I’ve got Tri-care, the military healthcare and I just went on Medicare in December, and when people call and ask, ‘do you have a supplement?’ and I say, ‘I have tri-care,’ they say, ‘you’re good’.

GM: Did the military help you with your education?

MB: No. At that point in time when I enlisted, I had already had my education. Eventually they would have rules and regulations that if you would re-enlist for six years you would get a bonus, but in the Reserves you never got the educational bonus, and it was only for those who were re-enlisting for the first time.

GM: Were you ever called to active duty?

MB: Yes, we were called up, and I remember because we were out of school for Martin Luther King Holiday, and got the call from the unit that said, we’ve been activated. We were one of the first in any of the 108th Division to be activated. So, we went for three months to Fort Jackson. Being a Drill Sergeant Unit, they would take people from the IRR.

GM: I was in the IRR for four years after being active, the Individual Ready Reserves.

MB: They took them and brought them back in and the Drill Sergeants would get them back to speed again and send them to Saudi, in Dessert Storm. So we were there for three months and that was stressful for a lot of people. We had two of our people die while at Fort Jackson, and when we got back, one went awol. It was very hard on the families because being in the military you’re in another world. When you go to AT, you’re putting your civilian world aside and you’re going into the military world.

GM: So, you’re doing a job as a teacher and all of a sudden you have got to drop everything and go where they tell you to go. How did you do that?

MB: Well, I called my husband, my daughter was in 4th grade and my son was in 2nd, and we went to the county office and did all the paperwork. We did the Power of Attorney and all the paperwork needed so I could go on leave. I told my principle and they had to find someone to cover my position while I was gone.

GM: What was your rank?

GM: What is that considered in the Army?

GM: It would hard for me to still be in the Reserves and just pick up and go.

GM: The ‘Army Achievement medal with Two Oakleaf Clusters,’ ‘Army Reserve Components Achievement medal,’ and the ‘National Defense Service Medal.’ Then there is the ‘Armed Forces Reserve Medal,’ the ‘NCO Professional Development Ribbon,’ and ‘Army Service Ribbon.’ Which one is your favorite?

MB: Meritorious service, because I got my first, I can’t remember the year, they had a position, an MOS 79 Delta. It was retention NCO. The first time they did this we went for Second Army they had competitions, and I won Second Army, and you had to go to Forces Command in Atlanta but they did away with it because of Desert Storm. So, the next time they did this I won Second Army again and went to Atlanta. The competition was from all over the United States. After the interview, I went upstairs and talked to my husband and said, ‘we might as well go now, I did horribly.’ The one thing I remember they asked me was, ‘where the page number of a map was?’ I didn’t know, it had been years since I’d had it. For some girl just coming out of basic she would know all of this, but this was a retention competition. But, we went back down and they announced I’d won. We got to go to the Pentagon and accept the award. 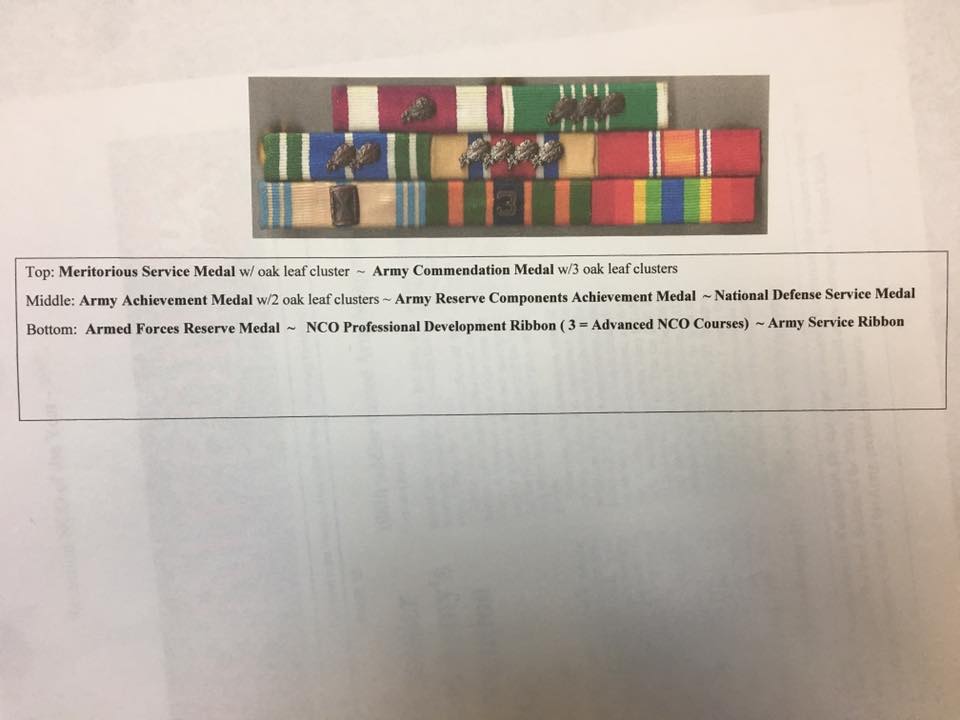 GM: That is awesome.

GM: After twenty-two years in the Army Reserves, with active duty time mixed in, a career as a teacher, what did you teach?

MB: I taught reading, education and then technology at Casar for thirty-three years. 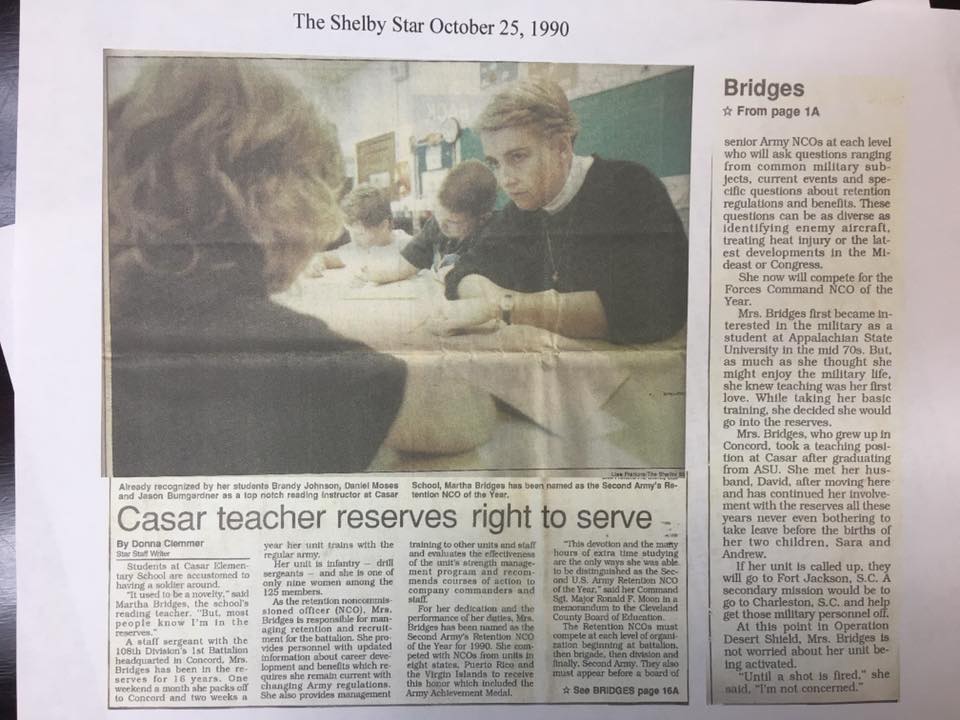 MB: It gives you discipline, if you don’t know what you want to do in life this is a way to find out quickly. It gives you a socialization with other people, a different way of life and because the military is a different world, you view things differently. It has such heavy discipline going through basic but don’t let that discourage you. Basic is designed to weed out the weaker and designed to make you stronger. It will either make you or break you. If you are a strong person it will only make you stronger. And then after basic, you’ve got options. How many people can leave school, go into the military for twenty years and then retire, many times by forty and then start another career. After those twenty years, you get retirement, medical, you get such great benefits, and you’re a veteran.

Regular Army didn’t appreciate Reserves, we were weekend warriors and you didn’t feel appreciated. I remember when I got into the post, it made me feel like, yes, I am a veteran, I did serve, I did something. To stand up and say, I’m a veteran and salute the flag, and go places and hear the Star-Spangled Banner and salute instead of putting your hand over your heart, I’m really proud of it, I’m proud of my service. 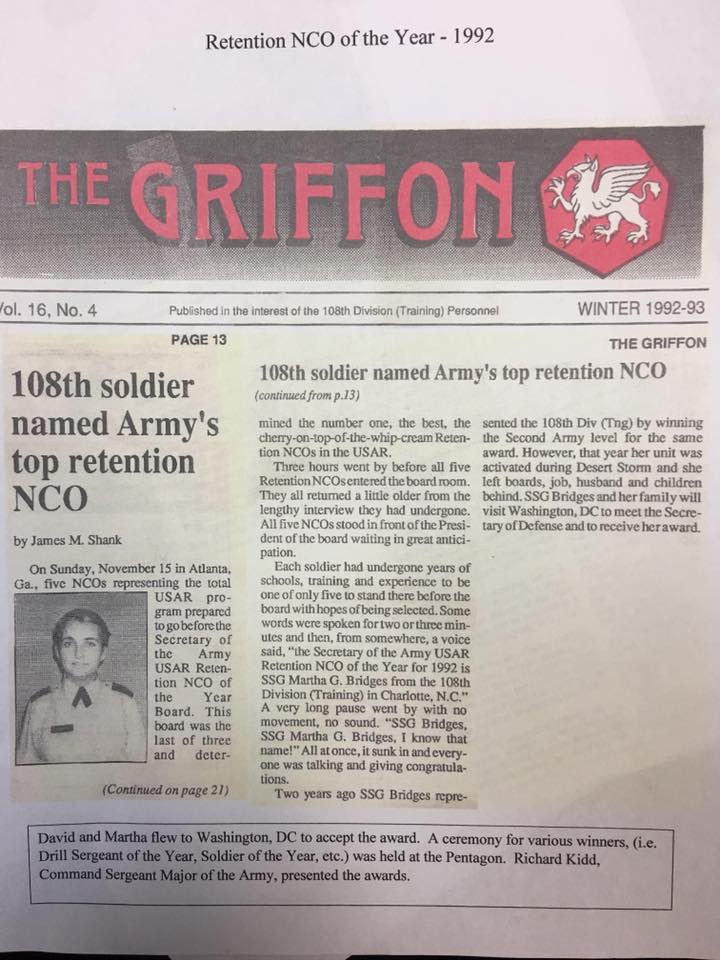 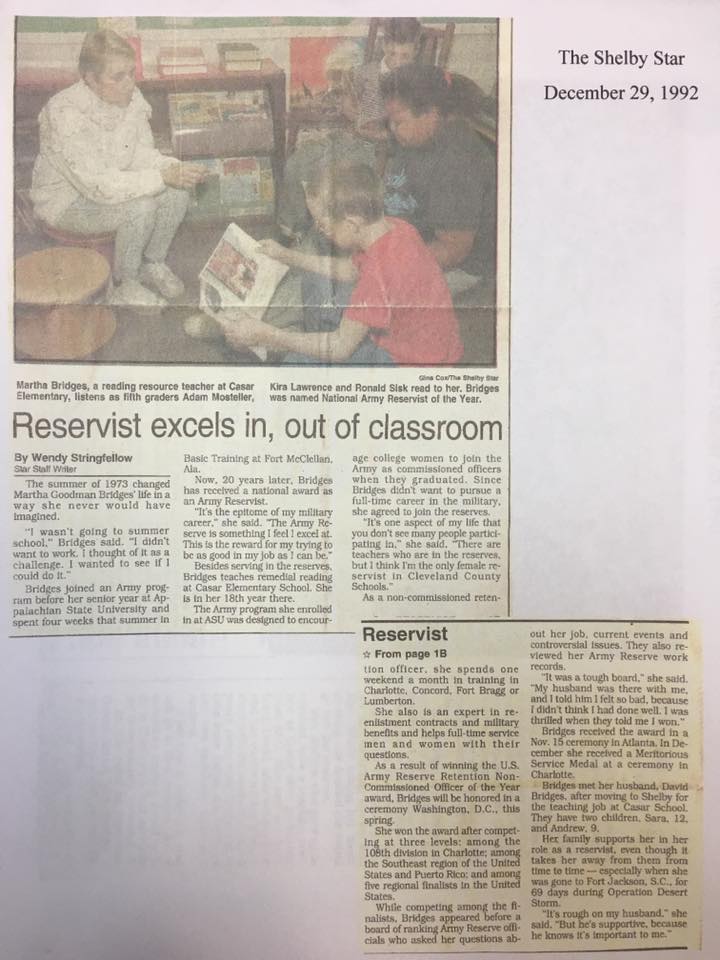 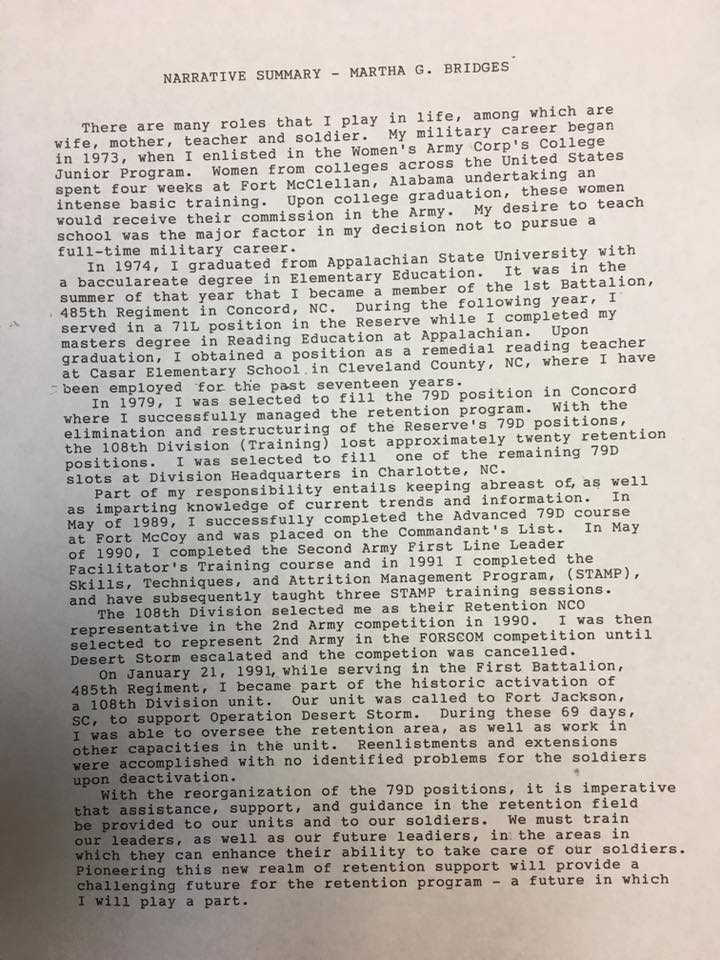 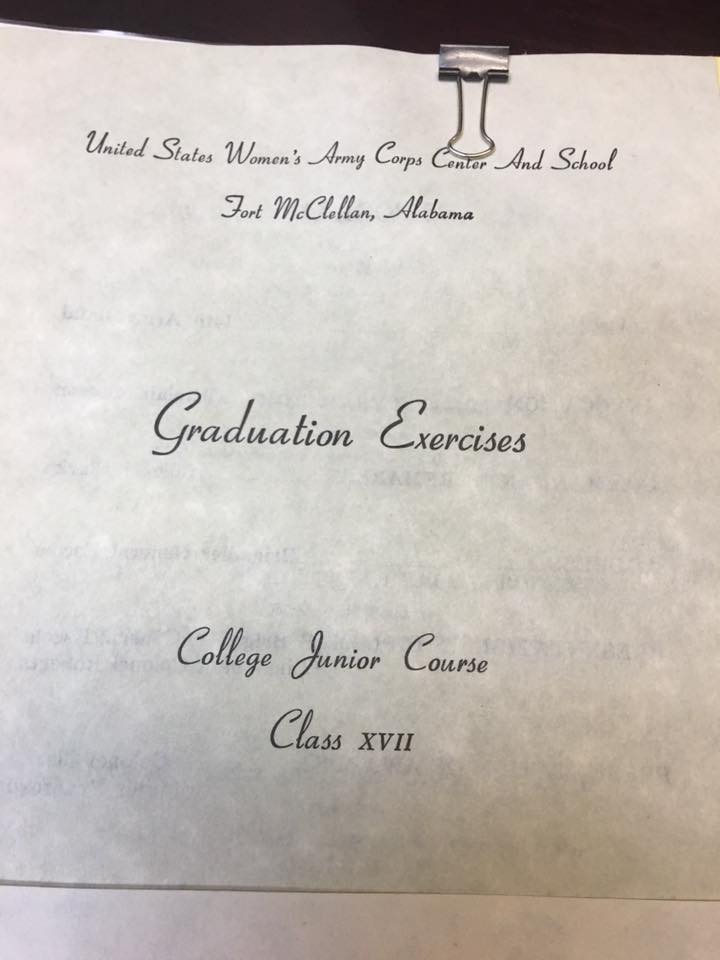 Contact me if you have any questions. Elder Law is what we do!

Posted on February 19, 2017 in Articles by Greg McIntyre